This eggplant relish meze or dip recipe is the perfect summer side dish. It’s loaded in fresh and colorful vegetables. No matter how much you make, it’s never enough because it’s always gone so fast!!

As most of my readers know, I grew up in Albania and that’s where I learned how to make this Eggplant Relish. Albania is in the Mediterranean but it is also part of Balkan region and it used to be considered Eastern European for a while but now it’s South East Europe.

Our region has so many eggplant mezes or dips and they have similarities but also differences. Take for example Ajvar, a red pepper and eggplant dip famous in Albania, Kosovo, Serbia, Macedonia etc. Ajvar is made with eggplant and red peppers.

Then there’s the Italian Kaponata, the Romanian Zacusca, the Russian eggplant relish as well as plenty Middle Eastern eggplant dips like Baba Ganoush that have made their way into our cuisine as well. Since our region has so many eggplant dishes, it’s no surprise that a lot of them have overlaps or new recipes pop up all the time.

It seems like a lot of eggplant dips recipes, but if you love eggplant like we do you’ll really enjoy all of them:). Check out my Stuffed Eggplant recipe for an eggplant dinner recipe!

How to Roast the Vegetables?

Our homemade version of this eggplant relish, it’s made with roasted eggplant and green pepper. Usually we roast them whole. Then peel the green pepper and dice. Also, we scoop the flesh of roasted eggplant with a spoon. I made a little video to show how we did this dip back home.

A more modern version, requires eggplant to be cut in cube shapes and roasted in a baking tray drizzled with olive oil. Either way, you’ll get similar results. I like roasting the vegetables whole though as I’m used to making the dip that way.

This is a forgiving recipe and can be adapted to taste. We usually don’t make it by weight as much as we use whole quantities as to use up the vegetables. For example, 2 eggplants, 1 green pepper, 2 tomatoes etc. Then you adjust onions, olive oil and lemon with herbs to taste. Here are some of my tips for best results: 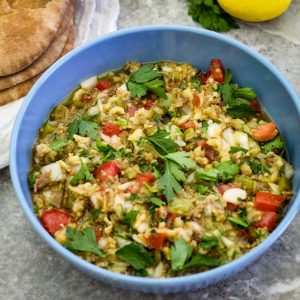 If you would like to save this recipe for later, please save the below image to your boards in Pinterest. Let me know in comments if you have any questions or feel free to tag me in social media with your rendition of the recipe:). Thank you for reading my blog!