In my native country of Albania we cooked red peppers in a variety of ways. Red Peppers cooked in Pressure Cooker were called Speca Gogozhare. Once they cool down, you can cut them in different shapes and serve them in salads or crostinis. I have lived half my life in Albania and half in USA at the time of writing this post. Right now I use an Instant Pot to make these peppers.

How Do These Red Peppers Taste?

These red peppers when cooked in pressure cooker with this Albanian recipe, taste both sweet and tangy. Like they’re a little pickled.

When I first moved to US, I kept buying every jar of red peppers I saw on the store. But they were all roasted. So finally I decided to make my own!

How Do You Serve These Red Peppers?

The main way to serve these red peppers is on a salad. They can be part of a Mediterranean Meze spread. You can also just serve it over a sourdough slice of bread with a layer of ricotta. And finally I have seen them used in street food incorporated in burgers and gyros.

It doesn’t matter if you are using a simple pressure cooker or a modern version like Instant Pot. The concept of cooking these peppers is very simple. They need to cook for about 5-7 minutes pressurized. 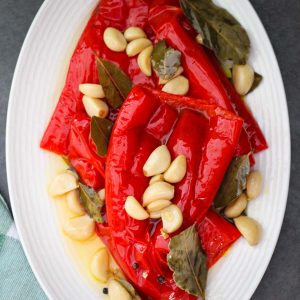 If you would like to save this recipe for later, please save the below image to your boards in Pinterest. Let me know in comments below if you have any questions or feel free to tag me in social media with your version of this recipe:). Thank you!

See below some of the my other Mediterranean recipes: