What’s your favorite part of going to eat at an Italian restaurant? I can’t lie, the warm bread that they serve as a starter with olive oil and seasonings it’s a definite favorite of mine. I decided to come up with a homemade Mediterranean crostini that was easy and that I usually have all the ingredients for. That’s how I came up with this Feta Cheese Cucumber Crostini recipe. Hope you enjoy it as much as I do!

Some links in my posts may be affiliate links, which means that I may receive a commission if you purchase items by clicking on these links. I will always disclose when a product in a post has been gifted by a company as well as when a post or product is sponsored.

Both these appetizers are similar. They are both toasted or warm slices of bread that are topped with either sweet and savory goodies (or a combination), served as appetizers or finger food in cocktail parties. I see crostini as a smaller version of bruschetta, usually made out of baguette slices. Also, crostini can be more crispy. I tend to let it toast more than bruschetta bread.

As most of you know I grew up in a small Mediterranean country, Albania. We bought fresh, warm bread daily from the local bakery. My parents would send me to buy bread and by the time I got home the crusty, corner of the bread was always missing. I used to eat it while walking back home:). Feta cheese and olives were a typical accompaniment of bread. So these feta cheese cucumber crostini with olive oil & olives remind of my childhood days and flavors of the Mediterranean.

Here are some of my notes and tips for making this recipe. First it is extremely easy to make. Secondly, it allows for a lot of flexibility and I will share those options below.

Here are the ingredients I used for this crostini. 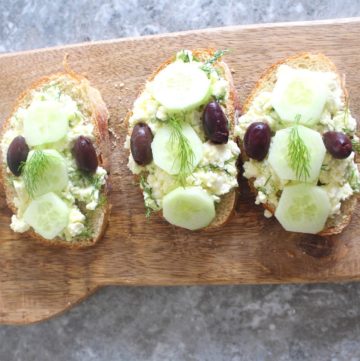 If you would like to save this recipe for later, please save the below image to Pinterest. Feel free to tag me in social media or contact me with any questions when you are making this recipe:).

If you are looking for a sweet-salty crostini combo, please check out this Pear Brie Crostini recipe.

Here are some other Mediterranean recipes from my blog. Enjoy and thank you for reading:)