Chuflay is a traditional Bolivian cocktail prepared with Singani, ice, ginger ale and lemon. Really, it is that simple!!! I have enjoyed this drink so many times throughout the years since I have met my husband. My father in law prepares it quite often for family gatherings. However, I was the one to prepare it last Friday. It was a crazy week. My husband was traveling for work and came home Friday night. We both had a hard week between flights and kids activities that by Friday night we needed an end to the week. What better way I thought than a simple Chuflay drink!!

Chuflay originated somewhere around end of the 19th century and beginning of 20th century. It seems the details of how the drink originated are a bit fuzzy, there are several versions out there. I kept messaging family members from my husband’s side and asked if they knew how Chuflay originated and got plenty of interesting responses.

One story says that the drink was born on the onset of the 20th century developing railroads in the country. The favorite drink of the administration employees at the time was a drink called Gin & Gin made with gin and ginger ale. However, gin was kind of hard to come by so these officials (mostly of English origins) replaced gin with singani.

The new drink made with singani and ginger ale got called short-fly by the railroad workers. That was a term they used to represent a temporary pass over a dangerous area, an overpass etc. This was because they considered the replacement of gin with singani a short-fly, a temporary solution. As the drink became more popular on its own, no longer a replacement for something but instead a cocktail of its own merits, the locals started calling it chuflay.

The other story says that Americans used to drink singani with soda in the Yungas area of Bolivia. It is a forested area, very humid and warm. Because of the humidity and so many flies and mosquitos, it is said that the Americans used to try to scare them by hand while holding their drinks and saying Shut Fly, Shut Fly which the locals took it as chuflay.

I got to confirm both stories not only with family members but also with the current director of Casa De La Moneda (Potosi), Luis Arturo Leyton. I’m very thankful to him for taking time from his busy schedule to answer my questions.

Now almost a century later, chuflay is considered a cocktail representing Bolivian gastronomy and is part of national patrimony.

Singani is a Bolivian drink distilled from grapes, more specifically white Muscat of Alexandria grapes. It is sort of similar to Eau de Vie (French), Raki (Albanian), Schnaps (German), Grappa (Italian) etc. This type of grape is grown in the valleys of Tarija, Sucre and Potosi regions.

Spanish missionaries started growing the first grapevines in Bolivia in the mid 16th century. Most of the distilled grape drinks of that time were called aguardientes thoughout the Americas. However, the merchants saw the need to differentiate between different liquors by area of production. The Bolivian Singani word was born from the Aymara language word of ‘siwingani’ and slowly took the form of we use today.

There’s also a theory that Singani took its name from a farm/ranch called Hacienda Singani which is located about 3 miles from Turuchipa (Potosi). Luis Arturo Leyton, Director of Casa De La Moneda (Potosi) recently found a document that points towards this theory. All the aguardientes of the time were called just aguardiente and little by little they started taking the name of the location where they came from. When this aguardiente from Hacienda Singani would come over in containers made of goat skin, people would say that ‘Aguardiente Singani arrived’. And that’s how maybe Bolivian Singani got its name.

Interesting tidbit I found online while searching information on Singani is that a famous Hollywood director liked it so much that he collaborated with Casa Real to create his own brand of singani called Singani63. This brand is sponsored by Steven Soderbergh as part of his The Steven Soderbergh Adventure program.

It hasn’t been long since I published this post. I got a lot of great feedback but I noticed that some people do drink chuflay with ginger ale and some with sprite or 7up. While that is a matter of personal preference, I wanted to investigate in more detail what the traditional way of serving Chuflay is.

I posted in Social Media, anywhere from Instagram to forums like Reddit and got lots of great responses. The overall consensus is that the original drink is made with ginger ale. One person mentioned that singani/sprite version is a staple at Bolivian weddings together with whiskey and coke.

I was pleasantly surprised to get an answer to my question in Instagram from brand Rujero Singani: “Always Ginger Ale! Preferably Canady Dry. If you wanna spice things up, try it with ginger beer.” So now I’m definitely going to get some ginger beer and try this drink with a twist:).

And the funniest answer I got was in Spanish and I’ll quote it exactly as it was written. ” Un paceño que se respete lo toma con ginger ale de Canada Dry y sus gotas y rodaja de limon. ” My translation of that answer would be: Any decent person from La Paz would drink it with Canada Dry Ginger Ale, lemon juice and a slice of lemon.

The below recipe is just a guideline. Feel free to mix to taste. If you have never tried Singani before keep in mind that it is a strong drink. So I would start slow and add more to the drink. Or if you prepared the drink too strong, then add more ice and ginger ale to it. 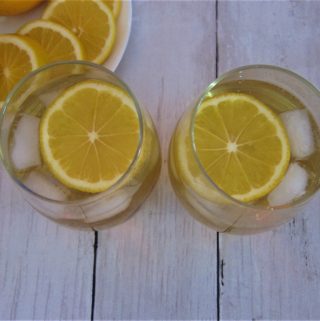 If you would like to save this cocktail recipe for later, please pin the below image to Pinterest or press the sharing Pin It button in the bottom of the post. Thank you and enjoy it responsibly:))

If you would like to checkout some of my Bolivian food recipes please see the links below: