Some links in my posts may be affiliate links, which means that I may receive a commission if you purchase items by clicking on these links. I will always disclose when a product in a post has been gifted by a company as well as when a post or product is sponsored.

What is Puffed Quinoa?

Quinoa is a grain that originated in the Andean region of South America. It was mostly consumed by the people living around lake Titicaca thousands of years ago, that would today be an area between Bolivia and Peru. Quinoa was considered by the Incas as a sacred grain or the mother of all grains.

You can puff quinoa to lighten it’s texture  and use it in breakfast and snack recipes. Puffed quinoa won’t pop as much as corn does, but it will still pop.

I first tried puffed quinoa in La Paz, Bolivia at the hotel where we stayed. I loved the taste of quinoa pops!! When we got back to Miami after our vacation, I looked to purchase them everywhere for a while until I found them at a farmer’s market. This time, one of my husband’s cousins sent a box to me from Bolivia because she knows how much I love it. You can try to pop quinoa yourself too. I’ll add instructions on how to make puffed quinoa soon!! You can also find them online.

Puffed quinoa comes in sweetened or unsweetened form. I personally prefer unsweetened because I get to add honey or sweetener of choice to my breakfast.

Quinoa is a grain that contains all essential amino acids unlike the other grains. Furthermore, quinoa has a high protein value as well as high quantities of fiber. Quinoa is also special because it is gluten free, which makes a favorite grain among people who suffer from Celiac disease or are gluten sensitive. I recently learned that quinoa also has a low glycemic index which makes it a perfect food to add to the menu if you are trying to control blood glucose level.

This puffed quinoa breakfast recipe is very simple and very easy to modify to your diet. Feel free to change ingredients as desired.

I usually mix blackberries and raspberries with yogurt for this puffed quinoa breakfast. You can use other fruits like strawberries and bananas and replace honey with agave syrup or other sweeteners. Hope you enjoy it:)

Cinnamon mixed with puffed quinoa is such an awesome combination. I plan to use it again for other recipes. So I always sprinkle some cinnamon over my quinoa in my jar. 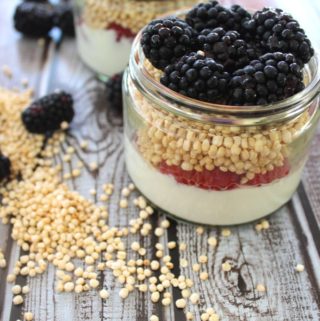 If you’ve been following my blog for a while, you know that I love quinoa. See below some of my other quinoa recipes.