Have you ever tried Pickled Green Tomatoes? We made them every year around Fall time as soon as the first couple cold days started. In my native country of Albania, they are called Domate Turshi.

Pickling in the Mediterranean

Pickling vegetables is a very ancient tradition dating back over 4000 years ago. It’s rumored that even Cleopatra of Egypt and Caesar of Rome ate pickled vegetables.

The Mediterranean region has a long history of pickling vegetables. Initially, pickling vegetables was done to preserve more produce from summer months to use well into winter. Typical preserves in brine or vinegar included cucumbers, eggplant, peppers, and green tomatoes.

With time, pickled vegetables became part of the diet and gained popularity for its added health benefits & taste.

There are 2 main methods of pickling. Just brine or brine and vinegar.

The one my family and many other people in the Mediterranean used for many years, it’s the one where we pickle vegetables just with brine (water and salt). This method of pickling uses a fermentation process where vegetables pickle and ferment slowly while immersed in brine. It’s important to use anything handy to keep the vegetables from popping up on the surface, they have to be submerged at all times. We used a flat surface rock in my house to keep the pickled vegetables submerged. Also, the container (usually clay jug) with brine and vegetables was placed in a cold cellar or balcony in a dark corner where temperatures overnight went below 32 degrees F.

The other method involves using vinegar to complete the pickling process. Formula varies from family to family, brand to brand. There are different vinegars used, some with the ‘mother culture’ still in it to aid in the fermentation process. You can keep this jar in a dark, cool corner of your kitchen for 2 weeks. Then refrigerate upon opening.

Not all salts are made equal!! Avoid table salt when trying to pickle anything.

It’s recommended to use Kosher Salt, Himalayan Pink Salt or Sea Salt. My personal preference is to use coarse Mediterranean Sea Salt.

How Do You Serve These Green Tomatoes?

Once pickled, you can make salads with these green tomatoes. You can slice them pretty thin to insert in sandwiches and eat them any other way you eat pickled food.

The most common way we serve these tomatoes in my house is with a bean soup!! If you have never tried bean soup with pickled vegetables, add this to your bucket list!!

Once we finish the salad, we even pour the olive oil mix left on the plate after salad is over, on top of the beans and give it a quick mix. Hmmm hmm hmm!!

This recipe is so simple and can be replicated in thousands different ways. Feel free to start small to validate that the concept works or take notes on how you’ll tweak it to your specific kitchen and type of jars you have.

These tips are some observations I have made throughout the years that help me make these pickled green tomatoes safely.

Check the video at the end of the recipe card too, it has some extra tips as well. It’s my first video where I appear in camera so I was a bit nervous while filming it, but I hope I conveyed the tips about making this recipe clearly. Thank you for watching it:). 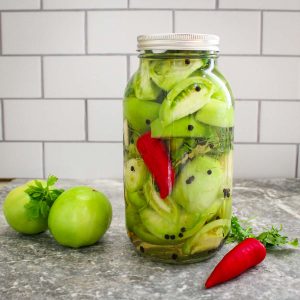 If you would like to save this recipe for later, please save it to your boards in Pinterest. Let me know in comments if you have any questions or if you make Pickled Green Tomatoes with a different formula. I’m always eager to learn different methods and experiences as well as share mine:). Feel free to tag me in social media with pictures of this recipe. Thank you!