Are you doing keto diet or low carb diet? If so, do you find yourself missing bread? I sure did!!! Both my husband and I have done keto few times. Back in 2016, we were both successful with it. We kept it simple, protein and lots of veggies, eggs and cheese, lots of big salads and occasional fruits after the first few weeks. I loved it!! It didn’t seem like a diet because I was always full. However, I kept missing bread! Back then, there was this recipe circulating around in all Facebook group about a cream cheese bread. I tried that so many times with no success (yes, even food bloggers sometimes don’t get recipes right 🙂 ). Little by little, I came up with this almond flour, flaxseed, cheese keto bread that we all love!! It doesn’t seem like a diet bread, it’s just bread:).

Almond Flour and Coconut Flour are among the most used flours to make keto recipes. They are both low in carbs and high in fiber. I prefer Almond Flour to convert some of my regular recipes to keto because I can replace regular flour on a 1:1 ratio with almond flour. The downside of using Almond Flour is that bread doesn’t become fluffy like regular bread but it is dense. For a while I got stuck on how to make this bread softer and less dense.

I had bought ground flaxseed for another recipe. I wasn’t sure how it would taste in bread and if it’s mix with almond flour would be a good mix. AS per health benefits of flaxseed, I thought I had a winner when I was reading about it. WebMD has an article that summarized says that flaxseed might help reduce the risk of several diseases like diabetes, heart disease, cancer, stroke etc!! (Running to buy another packet:) – ok, i’m back!! ).

Ok, so the combination of almond flour and flaxseed was really good but I felt it was still missing something. I settled for it for a while, it was ok for using at home when i craved bread but it wasn’t blog ready yet. Some recipes just require a lot more than others.

I have a recipe for gluten-free cheese breads (lots of carbs haha – i don’t always do keto:)) that is such a hit with my kids and all their friends. When I re-did the gluten free cheese breads few weeks ago for a playdate and it downed on me. Why don’t you use cheese in your keto bread recipe too?

I stocked up on several cheese and did some iterations. The final version of the recipe is below and it is my favorite. If you will change quantities or cheeses, let me know in comments how it went:).

Every ingredient in this recipe has been researched for a long time and if you read the previous paragraphs you know by now that this recipe took several iterations to come to this form. It is delicious, it satisfies a craving for bread and toasted is really, really GOOD!! Now, let me be frank! It is not as good as real bread, sorry! I won’t claim that, but it comes really close and it is perfect for that craving.

I had breakfast the next day after I baked it and I was happy the rest of the day:). Here’s my low carb breakfast below: 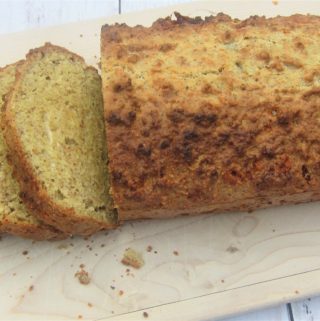 If you would like to save this recipe for later, please pin the blow image to Pinterest. Let me know if you gave the recipe a try and what you thought. Thank you:)