Few weeks ago, we had friends over for a Sunday BBQ. My husband was going to handle the BBQ but I was making lots of sides dishes and dips. Since we are such a diverse group of friends, I wanted to make some side dishes that go well with BBQ but also are foods that my friends like. I know that one of the couples loves arroz con glandules, but also lately they are eating more plant based food. So I set to experimenting into making a vegan Rice with Pigeon Peas or how it’s called in Spanish, arroz con glandules.

What Is Arroz Con Glandules?

Arroz con Glandules or Rice with Pigeon Peas is a typical Puerto Rican dish. This dish is cooked in other Caribbean & Latin/Central American countries. Living in Miami I have had the chance to try not only the Puerto Rican version but also a Dominican version and a Panamanian one. So even though this is a Puerto Rican dish, many other countries and regions have adapted the original recipe to their cuisine and traditions.

The typical arroz con glandules is made with pork/ham, rice, sofrito, pigeon peas and condiments. As I mentioned earlier this is an adapted version to create a meatless side option for our guests.

You can buy sofrito or cook it at home and I prefer the homemade one. See below some more information on sofrito before you move on to the recipe.

Sofrito means to lightly fry something. The term is usually used in the Caribbean and Latin American countries who use an aromatic sauce usually made with peppers, garlic, cilantro etc as a base to their recipes. Other terms to describe this sauce are sofregit, refogado etc and versions of sofrito are found in the Mediterranean as well as Caribbean, Latin America regions. A very cool article on sofrito is this one by The Spruce Eats, in case you want to read more on this cooking sauce.

Here in Miami, I’ve seen more versions of sofrito that I can count. But if you ask my non-professional opinion, the Cuban sofrito has tomatoes and the Puerto Rican one doesn’t. That’s as much as I can generalize:). If you cook sofrito at home, please let me know how you do it and which ancestry do you attribute your recipe to. I’m always curious to learn something new!

I’ll include in the recipe card below ingredients and steps to prepare both sofrito and rice with pigeon peas. Here’s a picture I took while I was preparing to get started. It shows most if not all the ingredients I used. It helps to have a big picture image. Also, vegetable sizes vary from place to place so sometimes saying 1 onion or 1 bell pepper might constitute a totally different volume than what you have at home. So hoping this picture helps you adjust quantities.

Please note that traditional Arroz con Glandules has ham, chicken stock and other meats potentially. The version below is a vegan recipe.

I like using frozen pigeon peas (glandules) but you can use canned too. Just make sure to rinse properly.

Traditional Puerto Rican arroz con glandules (rice with pigeon peas) has additional seasonings to the ones I have included in my recipe. If you are interested to adding more seasoning, check out the Latin section of spices in your local supermarket. There are several brands that include certain flavorings and seasonings that can be added to this dish as well.

I’ve tried a version with green olives as well, but I really love the manzanilla olives stuffed with red peppers in my picadillo recipe. I feel like this recipe has enough ingredients when used as a side dish. However, if I was cooking the version with ham, stock etc then I would consider adding the olives and more seasoning as well.

The most difficult seasoning to find is the achiote paste. My store has this version, but when I travel to see family I’ve seen other brands in their grocery stores.

Here are some step by step pictures I took while cooking. They’re not as clear as the final pictures because of steam kitchen lighting. However, I hope they’ll help make cooking instructions easier to understand. 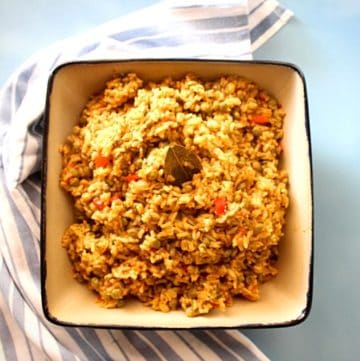 This vegan recipe for rice with pigeon peas or Arroz Con Glandules is based on a Puerto Rican recipe. The traditional dish does have ham and chicken stock which my recipe doesn't. This is a perfect side dish recipe for the Holiday get togethers, BBQs etc.
5 from 4 votes
Print Recipe Pin Recipe
Course Side Dish
Cuisine Gastronomia Latina, Puerto Rican
Servings 8 people

Ingredients for Rice with Pigeon Peas

If you would like to save this recipe for later, please Pin below image in Pinterest. Thank you!