When I was a little girl, I remember very clearly that fruits & vegetables were very seasonal. Winter time meant lots of cabbage, leek, and spinach dishes. I try to cook as often as I can with seasonal products. However, living in Florida adds some challenges to that because of the tropical weather. Today I’m sharing with you my Mediterranean Leek Casserole recipe. It does have ground beef and rice but I’ll share some modifications in addition to the main recipe in case you need to adapt it for keto or vegetarian diets (see Eating Lifestyles post for more definitions).

Some links in my posts may be affiliate links, which means that I may receive a commission if you purchase items by clicking on these lnks. I will always disclose when a product in a post has been gifted by a company as well as when a post or product is sponsored.

Leeks are a great source of antioxidants. They are shown to help with heart related issues and have cancer fighting qualities. This vegetable is a great source of Vitamin K and Vitamin B6. Leeks also have lots of manganese, copper, iron, folic acid etc.

I was surprised at how a lot of people I know are unfamiliar with leeks. They look like a green onion on steroids. Even though they come from the same family as onions and garlic, they have  a lot milder taste. Leeks won’t make your eyes tear and your mouth smell:). But they still do carry a lot of the health benefits that onions and garlic have!! So load up on leeks!! Casseroles are an awesome way to increase your leek consumption.

Leeks need to be cleaned and prepped before cooking. Because of the way they grow they can accumulate dirt under the layers so that’s why they need to be cleaned carefully. I usually cut the white part, remove a thin slice from the top and then remove a layer or two. I wash it and put it aside. Then the ‘tail’ part, the green part of the leek is cleaned and washed thoroughly layer by layer. You can choose to include the green  part on the casserole or cook them separately for another dish.

Please follow recipe steps below to cook the casserole. My husband is currently doing a low carb diet so in order not to cook 2 separate dinners, I did the following. I did everything the same until step 7, then before adding rice I separated part of the leek mixture in a separate, smaller baking dish and baked that separately in the toaster over for 35 minutes.

If you would like a vegetarian/vegan version of this casserole, then don’t include the ground beef, double the rice to 1 cup instead of half a cup and replace the broth with vegetable broth.

In Albania we eat  this dish with toasted bread and sprinkled with fresh lemon on top. See below an example. Enjoy:)

You can serve this dish with a fresh salad or a light soup to start with. In that case, chances are you’ll have plenty of leftovers. This dish tastes better the next day because the flavors have had time to really work together. I have never frozen the leftovers so I don’t know if it holds frozen.

This easy leek casserole is amazing!! If you have never tried leeks, it might take you a while to like this dish. But I hope you give it a try. It’s healthy and delicious:).

If you are not a fan of casseroles, there’s a way to make this into a stew instead of baking it. I’ll have to do it again so I can give you exact cooking times. To make it into a leek stew, use meat chunks instead of ground beef. Don’t include rice in the recipe. Follow all steps pretty closely up to number 8. There’s no point in separating for keto since you’re not adding rice. Add water or broth then cook until ready. Don’t stir too often and cook in low temperatures. 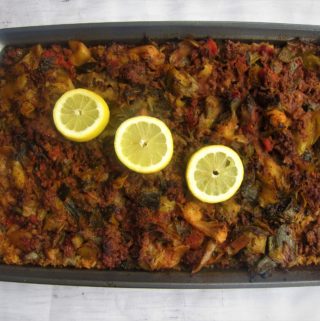 If you would like to save this Leek Casserole recipe for later, please save the below image to Pinterest:

If you would like to check my other Mediterranean recipes please check out the below links: