Today I want to share with you one of my favorite desserts: Albanian Hashure made with farro, dried figs and walnuts. Hashure is a wheat pudding with dried fruits, nuts and cinnamon. You can make hashure with farro or barley and you’ll get similar results. My recipe is made with pearled farro grains.

Some links in my posts may be affiliate links, which means that I may receive a commission if you purchase items by clicking on these links. For more details, please see my Disclosure Policy.

So it seems the origins of this dessert come from Turkey. Albania was under Ottoman empire for about 500 hundreds years so no wonder we do have a lot of crossovers in customs and cuisine.

The historic origin of Hashure is that it is a pudding prepared by Noah in his ark with all the leftover grains, nuts, legumes & dried fruit.

While growing up in Albania, I had no idea about the Noah’s Ark connection or when it is typical to cook Hashure or Ashura. We basically cooked hashure anytime we had the ingredients available. Later on I learned about the religious connection.

It seems that in Turkey ashure is a dessert made on the 10th of Muharram as calculated by the Islamic Lunar Calendar. However, in modern days it is cooked more often and cooked in big quantities to always share with family, friends and neighbors. Read a little more about Ashure in this Wikipedia article if you’re interested.

Back in my native country, several regions associate hashure with prosperity so we too cook a lot and share with loved ones to wish them prosperity (begati). I haven’t lived in Albania for almost 20 years now (at the time of writing this post) so maybe a lot of things have changed since I left. I would love to hear from you in comments what do you think the dessert relates to current customs.

Farro is a wheat grain similar to barley. I found only one brand in my grocery store, pearled farro. It looks exactly like what we called ‘grure’ back in Albania. Farro is used in several dishes in Europe and it is typical in Mediterranean foods. It can be boiled and used in soups, salads or ground and made into baked goods.

If you can’t find farro in your grocery store, check out this online selection.

This pudding is made with farro, dried figs, walnuts and cinnamon. Cloves add a distinctive taste as well. This is how I remember my mom making this recipe and I tried to go traditional this time. Below I will mention some ingredient substitutions and variations of this recipe.

Please see below some process pictures I took while cooking this dessert. Hope they make the recipe card easier to follow:).

While farro cooks, chop dried figs and put them aside. Also, add some water to starch and mix well so there are no lumps. 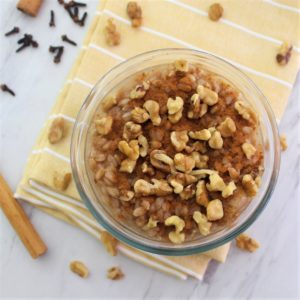 If you would like to save this recipe for later, please pin the below image to Pinterest. Let me know if you have any questions or tag me in social media if you made this recipe:). Thank you!!!

Please check out the below recipes for more Mediterranean Desserts: