Pique A Lo Macho is Bolivian culinary masterpiece in my opinion!! I had tried this dish several times even before visiting Bolivia. My husband was born in Potosi, Bolivia and we live in Miami, FL. When we were dating, his family would often have big get togethers and Pique Macho was one of the dishes served. Then I had the chance to have this dish in Bolivia too, in several cities!! If you are a meat lover and comfort food lover, this dish is for you!!

My version of Pique A Lo Macho includes a little bit more vegetables than the traditional dish. Also, we replace some ingredients that are typical in Bolivia (like locoto) with similar ingredients as we can’t replicate it exactly how the dish is cooked there. Hope you like this method:).

What is Pique A Lo Macho?

So let’s start from the beginning if you haven’t tried this dish before. It is said that the traditional Bolivian Pique dish was born in the city of Cochabamba in a restaurant called Miraflores. The dish is composed of mounted ingredients on top of each other and served on a platter. The dish is spicy, but you can adjust spiciness with how much locoto peppers you add to it.

The word Pique is pronounced [pee-keh] and it’s not to be confused with Barcelona’s soccer player Piqué where the accent falls at the end of the word. Pique can have different meanings but in the case of this dish it refers to the spiciness of the dish, the sting of it!

If you can have the whole dish by yourself, you’re a macho man. However, anytime I have had this amazing dish has been in a social setting and we have shared the platter between several people.

Pique Macho platters are often served with llajua salsa and beer. Llajua will add more spiciness on top of the spice the dish already has:). We make our own version of llajua at home, instead of quilquiña herb we use cilantro.

First let me give you a very high level of this dish’s composition.

See below a collage of pictures taken throughout cooking this dish. For more details, I have included a short video at the bottom of the recipe card.

So let’s go over the ingredients and substitutions. If you live in Bolivia, you already have access to all ingredients to make this dish as traditional as possible. But if you’re in US like me or anywhere around the globe and you’re trying to cook Pique Macho, these tips and substitutions will help come up with as close as possible dish to the original. 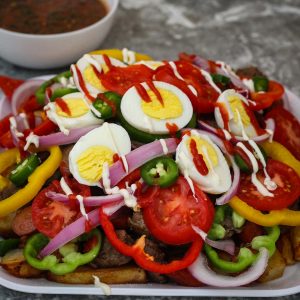 If you would like to save this recipe for later, please save the below image in your boards in Pinterest. Feel free to ask any questions in comments or tag me in social media if you made this dish! Thank you:)

We cook a lot of Bolivian food at home, sometimes we have to modify a little based on ingredients available here in Florida. If you would like to check out some of my other Bolivian recipes, please see below: