Candied Fruits Panettone with Raisins is a sweet, soft and fruity cake for the holidays! I grew up with Panettone being a Christmas tradition and I associate this cake with the holidays:).

Every December I bake several panettones and my family can’t get enough of them:). Maybe you’ve seen my Chocolate Chips Panettone recipe before as well as that is a very popular recipe.

Panettone is an Italian Christmas sweet bread that originated in the city of Milan (Milano). I heard that there’s now a competition happening yearly in Milan for the best panettone.

While the original panettone is from Italy, this sweet bread has become famous around the world. Here in Miami we have a large South American community and they all have variations of Panettone or Pan Dulce for Christmas as well.

When I lived in Albania, I used to watch a lot of Italian TV and the brand Bauli comes to mind as the one I used to watch the most in TV commercials for Panettone. Here in US, it seems Bauducco has the chunk of market share for panettones.

Growing up I remember very few variations of panettone, while now that this sweet bread has become known worldwide, there are adaptations to local fruits and ingredients. It makes me happy to see a new recipe or new ingredient used each year:).

The real panettone can take days to make. Famous panettone makers tweak and work on the starter dough for years. I hope to bring you soon recipes with sourdough, but for now the way I make my panettone is with Instant Yeast. Even so, it still can take several hours to make one.

While you work on mixing the other ingredients, the starter dough will rise and bubble. The panettone with instant yeast will rise like the real one, it’ll have a dome and it will be soft and delicious too. The only difference I’d say with the one made with sourdough is the crumb. This panettone with instant yeast doesn’t have the big holes in the crumb like the sourdough one, it’s more spongy.

Ok so for the experienced panettone makers, just skip ahead to recipe card. However, for everyone else hope you take the time to check out my process pictures and tips. My first few panettones were really a disappointment, very few tweaks here and there made such a big difference and ensure that I get good results every year:).

Here’s a summary of the process:

So below are 2 pictures of ingredients used in starter dough and panettone dough respectively. I try to soak the raisins in an orange liqueur few hours before I work on the dough. I make my own orange liqueur but you can use any orange liqueur you like, anything from Grand Marnier to Cointreau. Just keep in mind that any liquor has a different sugar content, so you’ll have to adjust the recipe accordingly later.

Butter and eggs have to be room temperature.

I use golden raisins for this recipe.

Cover the bowl with a plastic wrap and let the dough rise for an hour.

Once the dough has risen for an hour, then mix the fruits and raisins into the dough. Use a spatula to mix them well. Then transfer the dough into the panettone mold.

Baking is not overly complicated. I usually follow a simple formula for this size panettone mold. First, I preheat the oven once the dough has risen for the second time. Then I place the panettone mold on a baking tray, it makes it easier to handle and hold.

Bake the panettone at 400 degrees Fahrenheit for about 10 minutes, then lower the temperature to 350 and bake for about 1 hr. I cover the panettone with a tented aluminum foil once the color of the dome has reached a golden brown color.

Since Panettone is like a big cake or bread and it grows upwards into a dome, you want to protect its shape by not letting the panettone collapse into itself. When I bake mini-panettones I don’t need to hang them upside down to cool down but the bigger panettones like this one and my Chocolate chips one, I do have to hang them down to let them cool.

See video in recipe card for a quick instruction on how to do the hanging of the panettone. Usually I get 2-3 skewers, insert them towards the bottom of the panettong then flip the panettone and hang it. This is one of my set ups in the kitchen.

I use 2 containers from the kitchen as seen below. Another year I used two boxes of popcorn, the metal ones that come out only for Christmas.

Panettone molds – I usually buy mine on Amazon (affiliate links) as they are not available in any stores around me. I use 2 size molds. There are more options and brands than these 2, I just keep re-purchasing these so I don’t know how the others perform in the oven or holding the dough. 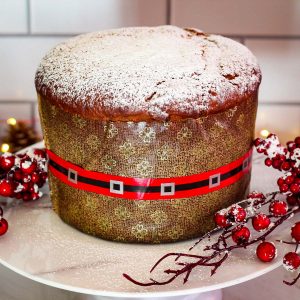 Panettone with Raisins and Candied Fruits

Sonila
This homemade panettone with raisins and candied fruits is such a delicious Christmas treat!! It's become a family tradition, not only for ourselves but for gifting it as well. This sweet bread is great for breakfast, afternoon tea and a treat on holidays!
Print Recipe Pin Recipe
Prep Time 30 mins
Cook Time 1 hr 10 mins
Dough rising 3 hrs 30 mins
Total Time 5 hrs 10 mins
Course Breakfast, Dessert
Cuisine Mediterranean
Servings 12 servings
Calories 518 kcal

If you would like to save this Panettone recipe in your boards in Pinterest, please save the below image to your boards. Let me know in comments if you have any questions or post your panettone in social media and tag me:).

Here are some of my other Holiday recipes, hope you enjoy them as much as me and my family do:). Happy Holidays!!